Okada Manila is the first of the Philippines’ biggest private casinos to report a massive layoff.

Okada Manila is the first of the Philippines’ biggest private casinos to report a massive layoff.

In a May 26 letter to its employees, Okada Manila president Takashi Oya announced that more than 1,000 employees would be let go through a retrenchment program because the new normal would require it to move forward with a “smaller workforce.”

“Not having any revenues since the lockdown has been financially draining and caused severe losses to the company, and if this is not address, its losses will pile up,” said Oya.

Oya announced the massive layoffs just a month after senior executives volunteered to take pay cuts for the workforce fund. Oya was also positive in his previous letter to employees: “I would like to assure you that your jobs will be here once we all go back to Okada Manila,” he added in his message to staff.”

Okada Manila – operated by Tiger Resort, Leisure and Entertainment Inc., a subsidiary of Japanese conglomerate Universal Entertainment Corp. – will give its notice of termination starting June 15 and give separation pay in accordance with law. 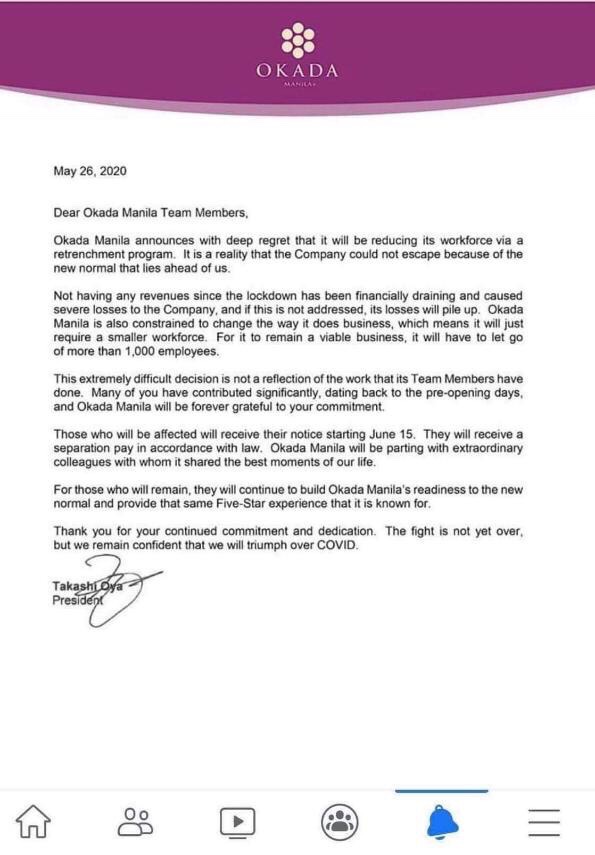 No industry can last being closed for more than 2 years: Joey Concepcion says PH should open its doors to more tourists just like Thailand